Growing up, I believed that there was a hierarchy to prayer.  Coming from a church that had a hierarchical structure where titles, experience, education, etc all contributed to the amount of structural authority and reverence one deserved, I couldn’t help but translate that into spiritual authority. I figured someone who had been in the church longer, or one who had a higher ministry title or more biblical education would have greater spiritual authority.  When I attended conferences or events and there was an opportunity to receive prayer from someone, I would scan the leaders to see who I felt would have the most “power” in their prayer; I would want to receive prayer from the person who I imagined God would hear the most.

These days, I at times hear people ask me for prayer believing that my prayers will be louder than theirs.  This hurts my heart. My heart hurts to know that this belief I once had is a belief that others have as well. A belief that says that your prayers aren’t good enough, loud enough, or worthy enough.

Of course there’s a million schools of thought on this and I don’t care to go into the theological debate of it all, but I have been taking this quarantine season to reflect on the heart of prayer.

Prayer is a reflection of our view of God’s character.  My prayer life has been cultivated by wanting to see who God is. Prayers are often focused on situation and circumstance, requests and pleas, yearnings and asks.  When I shifted my prayers from making those the foundation of my prayers (of course I still bring my pleas and yearnings before Him) into just a part of my prayer, my prayers became time sitting in the garden of encounter with the all powerful Creator. To know that I was invited to a stillness to hear His whispers and heart beats was a revelation that prayer was about being with. Prayer became my place of belonging with God. That belonging doesn’t change when my requests feel denied or delayed.

I also discovered that when it comes to these yearnings and pleas, that I am too often intimidated and wary of asking.

Recently I had to reach out to someone for a big favor.  I had played the scenario of asking multiple times in my mind and tried to convince myself not to. There were 2 streams of thoughts going through my mind.

Pride.  Why would I ask someone for help?  I should be able to, at the end of this journey,  say I did this myself. I had the education, tools, resources, and grit to take care of myself when I needed. I didn’t need help before, I certainly don’t need it now. Why give anyone the opportunity to look at me as someone in need?

But bigger than the feeling of pride was an emotion that’s pull on me was stronger.  An emotion that seems like the complete opposite of pride, but in essence is deeply entwined with.

Shame. What right did I possibly have to ask for help, to make a request? Who did I think I am? Why would anyone be willing to extend themselves to assist me?  Who am I?

After I made my phone call that was received with so much care and grace, I hung up the phone and wanted to crawl into a hole. The call went better than I could have ever imagined, and yet I felt so embarrassed, so shameful, so… small. Shame causes us to want to hide and that was immediately what I wanted to do. I felt so “icky” and wished I was an ostrich that could bury her head into the sand and not be seen. I didn’t want to be seen. Or heard. Or noticed. If there were fig leaves nearby of which to cover my vulnerability, I would have gladly buried myself in some.

Coincidentally, my husband was asking my son what he would like to do now that he was done working and had ample time to play. My husband asked my son if he wanted to kick the soccer ball around.  My almost 4 year old said no and when asked what he wanted to do, his voice trailed off timidly. My husband and I looked at each other, and we asked him again. My son half whispered/half mumbled “firetruck” and then I remembered that earlier in the day, my son said that he wanted to go outside and ride around in his mini firetruck. Now he had the opportunity to receive this desire and he was shyly stepping away from making his request. I also remember that earlier in the day I told him I wasn’t able to drive the firetruck with him, but maybe daddy could later. Because I have not been able to give my son a “yes”, the rejection caused him to feel like he could no longer ask.

As I watched him continue to fumble for words and avoid eye contact, my heart broke. Regardless of whether I could deliver on any promise, I always, always, always want my children to know that they can ask. That I would love to hear what they want, regardless of whether I can do it or not. I want so badly for them to feel free to be honest and candid in their desires. If their desires – for whatever reason – need to be refined or shifted (like wanting to roughly wrestle with his 1 year old brother), maybe I can be the one to walk them through it. If their desire is something that is not possible (like taking my son to the library right now) I want to be able to sit with him after and explain to him why and think up of other solutions instead. If his desire is something I can do, oh, that I could be there to watch him enjoy his gift! 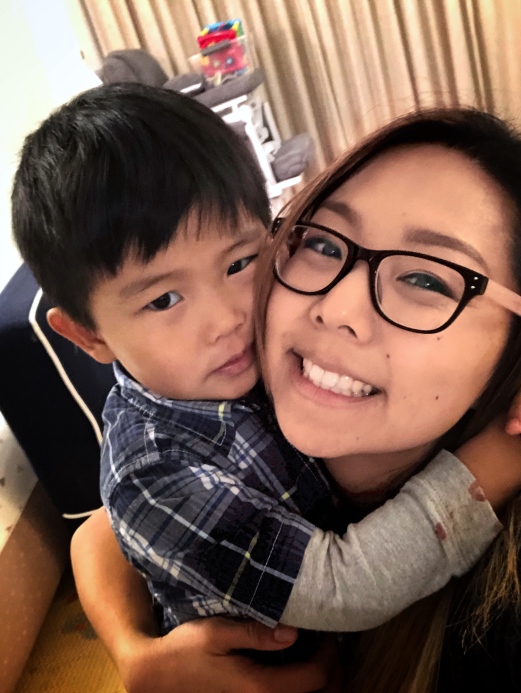 I love him too much to ever not want to hear his heart. And too much for him to never understand that.

And in that quick moment, I realized that God so very badly wants me to feel free to be honest and candid in my desires before Him. To walk with me in shaping my desires, or sit with me in pondering through other solutions, or to be with me to watch me enjoy whatever gift I’ve received. Because as much as prayer is a reflection of our view of who God is, it’s also this:

Prayer is a reflection of our view of who we are before God.

So we could theologically debate the purpose of prayer and outcomes and spit out multiple bible verses to argue out stances, but more than that, the heart of prayer is remembering who God is, and who we are before Him on the throne. May we know that our God is one who wants us to know our place of belonging. May we also be reminded that in that place of belonging, it’s not about rights or deserving our requests, it’s about the friendship and closeness to be honest and vulnerable and to be seen and heard.

So no, I don’t believe my prayers are louder than yours or that yours are louder than mine. But I hope that we are reminded that it’s not about the loudness of the words or sounds, but it’s in the gentle whispers where deep revelations of God’s heart are revealed.

One thought on “Prayer’s Reflection”