The past two weeks have been rough. Like, I think I’ve hit my mental and physical limit rough.  Filled with so many beautiful highs like celebrating my husband’s birthday and having our first dinner date out together for the first time in nine months. Yet the lows… were pretty low.

I work from home most days and I had the false assumption that this would be amazing. I’d be able to support my family while spending time with my son. Ha, no, this has been more tiring than any other work schedule I’ve ever had in my life. I think there’s this unhealthy thought in my mind that because I’m home, I have to constantly prove that I am sitting at home working and not just watching day time dramas on  TV. (I honestly don’t even watch TV anymore and couldn’t tell you what shows exist.) And so this spirals into me working and trying to juggle more while juggling my 8.5 month old. I have someone come and play with my son during the work hours so I am sitting in my home office doing work, but I feel the tug. When I hear him crying out or getting fussy I have to resist every urge to run out and swoop him into my arms. And when I take my lunch break to puree him some yummies and feed him, I have to resist the urge to respond to work emails on my phone during that time.

I feel like I’m not giving enough of myself to anyone.

I feel I’m giving too much of myself to everyone.

And it spirals back and forth between the guilt of not doing enough and the anger of doing too much. Ultimately I want my actions known and seen because it would feed some validation for me. In my mind if “they” see it, they would then honor my time, my space, my needs, my values, my world. Not only would they honor it, perhaps they would validate it with words of affirmation or more patience. There’s a piece that feels entitled to that, and a piece striving so hard to earn that. The validation and the affirmation that if they can see what I do, perhaps they can then know who I am. And if they can validate what I do, perhaps they’ll validate who I am. Because therein lies the core belief that who I am is still based on what I do. And if what I do is good, then I am good. 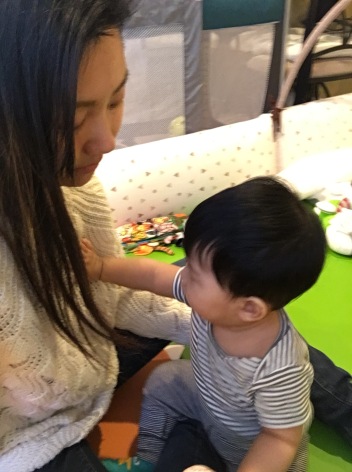